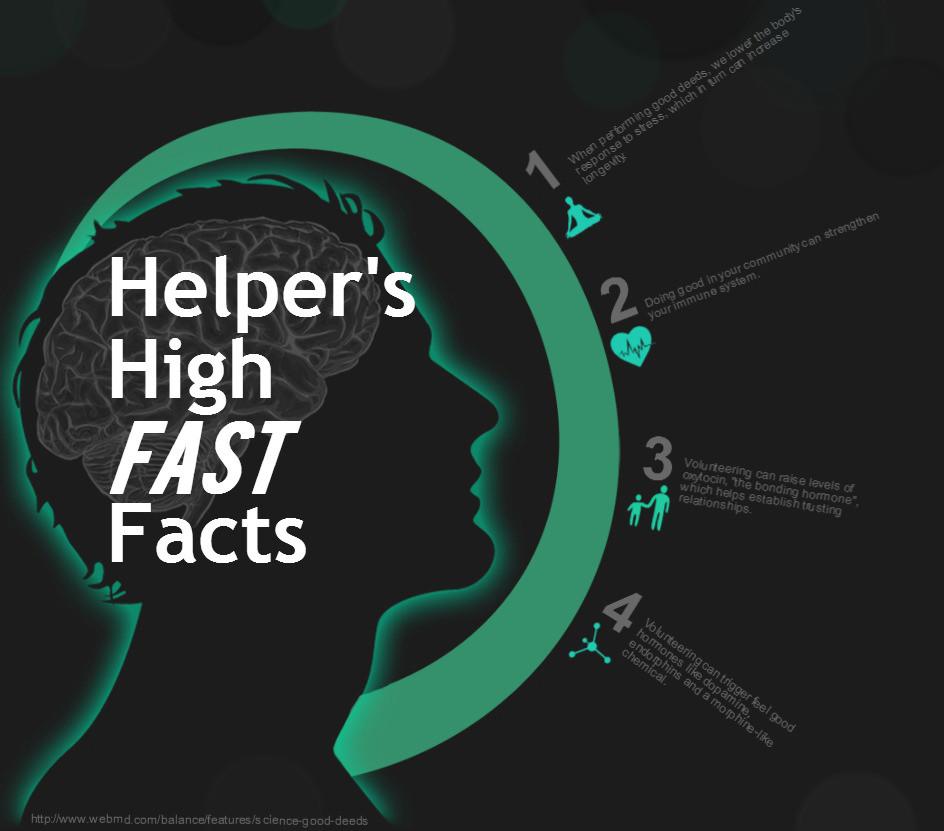 click on above image to view details about the effects of volunteering on the brain.

Volunteering and drugs can be similar, at least according to multiple studies conducted around the world.

Volunteering can lead to a rush of euphoria and the release of endorphins–the body’s natural painkillers–which are comparable to morphine.  This effect is coined a “helper’s high.”  What’s more, people can experience a less intense version of this feeling when they recall the altruistic experience.

Brain scans support the idea of this “helper’s high.”  A study at the National Institutes of Health showed that when people thought about giving money to a charity, the same pleasure areas that lit up on brain scans when they thought about food and sex were illuminated.  A similar study at Emory University showed that helping others lit up the pleasure and reward part of one’s brain.

A 1999 study published in the Journal of Health Psychology found that elderly people who volunteer for two or more organizations had a 44 percent reduction in premature death. This suggests volunteer work can be as beneficial to longevity for some as eating well or exercising is to others. Volunteering is proven to reduce stress and increase feelings of self-worth.  Countless studies have shown that people who volunteer tend to live longer, happier and healthier lives.

A study in 1990 had a group of nuns write personal essays.  The ones who expressed a positive outlook on altruism lived an average of 10 years longer.

“Studies of telomeres–the end-caps of our genes–show that long-term stress can shorten those end-caps, and shortened end-caps are linked with early death,” said Steven G. Post, PhD and head of the Institute for Research on Unlimited Love and WebMD contributor. “These studies indicate that we’re dealing with something that’s extremely powerful. Ultimately, the process of cultivating a positive emotional state through pro-social behaviors–being generous–may lengthen your life.”

However, one doesn’t have to understand the science behind the brain’s chemical processes to know volunteering makes one feel better.

Hornbaker works with a group of other volunteers making quilts for the pediatric ward at Lawrence Memorial Hospital.  They make enough quilts to allow every child admitted overnight to go home with one.

“Every once in awhile, we’ll get a photo or a thank-you note from a parent or child, and it is quite a rush when you get that because you don’t expect it,”  Hornbaker said of her own experiences with a “helper’s high.”

Senior Allix Ice volunteers with Big Brothers Big Sisters. Every week she goes to Deerfield after school to hang out with her “little sister.”  Although she has never experienced said “high” from volunteering, she agrees that volunteering has positively impacted her health and outlook.

“It just feels good to know that you’re wanted and being helpful,” Ice said.

Help yourself by helping others and volunteer.