Student Council brings awareness to eating disorders within the school 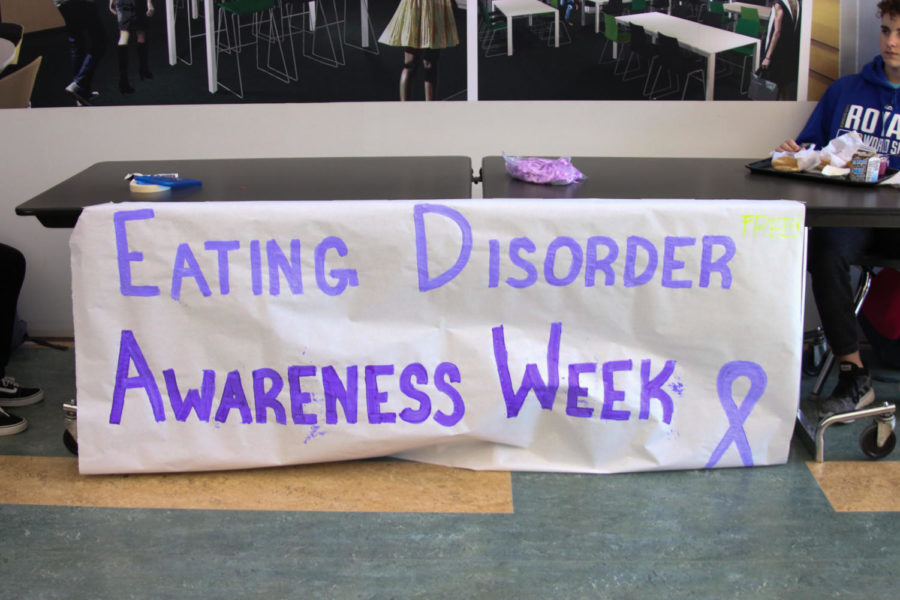 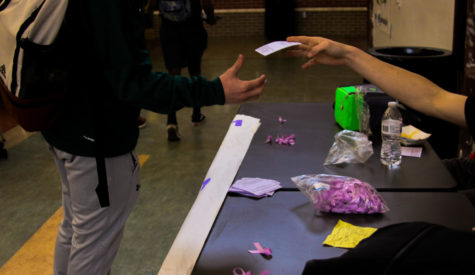 Baya BurgessWorking during lunch, StuCo members hand out informational flyers and purple ribbons to students. StuCo’s goal for the table was to spread awareness about eating disorders, which are very common among teens. “It was important to me to hand out ribbons because I wanted to make sure that it’s known because it is a severe thing,” freshman Sophie Johnston said. “I really do think that the table impacted people.”

In an effort to raise awareness for eating disorders, Student Council gave out purple ribbons at lunch during the last week of February. They encouraged everyone to wear purple on Thursday, February 28 in support of those who struggle with self image. Handing out ribbons annually for the past two years, this year was the first that members wore purple.

“We’re trying to [raise awareness] as much as possible and make it as big of a thing as it can be,” sophomore Aiden Basore said. 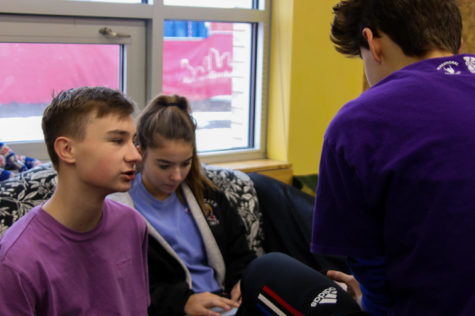 Baya BurgessTalking with his peers, sophomore Aiden Basore joins his StuCo classmates in wearing purple to spread eating disorder awareness. The project targeted high schoolers, as they are the most affected by eating disorders. “With body image issues in the news and on Twitter and Instagram, you’re always seeing people who are perfect, and it’s caused a lot more high schoolers specifically to have eating disorders,” Basore said.

StuCo members and advisor Kylee Wright find eating disorder recognition to be meaningful because bringing attention to the issue helps students realize that it affects many of their peers. By passing out ribbons, they intended to reach out to those who are suffering and help them recognize that they aren’t alone.

“Sometimes when other people are struggling, something like this brings out other stories so they feel safer about getting help and tell someone about it,” Wright said. 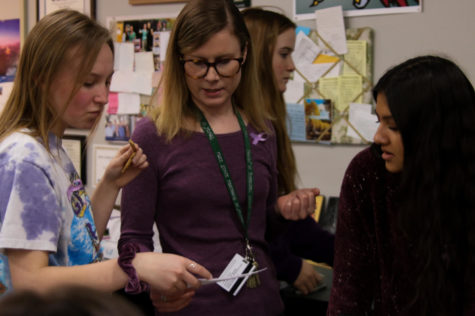 Baya BurgessWorking alongside her students, advisor Kylee Wright collaborates with StuCo members to come up with ideas to further spread eating disorder awareness. “We do it because it’s an issue that means a lot to me and Seth Williams,” Wright said. “It affected a couple of students of mine from the past, so it’s for personal reasons for myself and other students.”

As leaders of the school, StuCo finds it important to provide a safe space for people who struggle with eating disorders. Freshman Molly Weishaar believes that every students should feel like they are understood within the community.

“As StuCo, we are the kids who speak for the rest of the school, and we’re supposed to represent everyone,” said freshman Molly Weishaar. 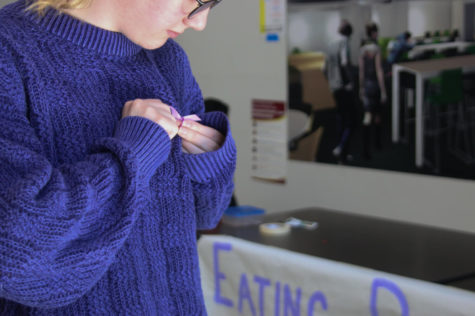 Baya BurgessSupporting Eating Disorder Awareness Week, freshman Molly Roecker pins a ribbon on her purple sweater. During lunch, Roecker and other students were encouraged to sport ribbons passed out by StuCo. “This is really important to make people aware of what it means to have an eating disorder, how to get help, and know you aren’t alone,” Roecker said.

This year, StuCo put more time and effort into spreading eating disorder awareness than any other, as they wanted to erase stereotypes and make students more open to discussion. Striving to create a dialogue about the issue throughout the entire school, StuCo used Eating Disorder Awareness Week as a way to represent those who feel unheard.