When a student gets in trouble at Free State, teachers traditionally “write up” that student, and send them to the office where administrators will dole out their punishment.

However, english teacher Kylee Wright sees this protocol as archaic and ineffective. Instead, Wright wants to incorporate restorative practices into the school’s procedures. Wright’s vision focuses on reconciliation over discipline, forcing students to think about the choices that led to them getting in trouble.

“Restorative practices are methods of interacting with students with the belief that… conflicts are best resolved by those most directly involved with them,” Wright said. “Some restorative methods are asking reflective questions and making reflective statements about a student’s actions.”

Wright explained restorative methods could also emphasize kids repairing damaged relationships and making amends for their mistakes, instead of simply sending them to detention.

Wright hopes to see restorative practices take a leading role in the redesign, as she believes that they have the potential to improve ties between students and their teachers, as well as help students develop more empathy for the victims of their actions.

“I would like restorative practices to be the foundation upon which we incorporate redesign” Wright said. “I would like teachers to be able to read the Restorative Practices Handbook and attend professional development as part of this.”

Anette Kenoly, a learning coach at the school, is in charge of providing guidance to teachers. She hopes to see schoolwide equity as a goal for the redesign through restorative practices, as well as more chances for teachers to connect with students.

“We need a consistent space where small groups of students have an opportunity to establish meaningful relationships with staff and other students,” Kenoly said.

Kenoly was motivated to support the program because it presents an opportunity to make changes to a system which she feels often sets students up to fail.

“I thought it a great opportunity to make real systemic changes that positively impacts all students,” Kenoly said, “Many students are successful in our current system, but many many others are not.”

Kenoly does see potential risks during the redesign, but prefers to call them “challenges.”

“The major challenge is the newness of the redesign process itself,” Kenoly said. “As educators, we walk into a system that is already established, functional or not…. With redesign, we can examine any part of our current system and re-imagine it.” 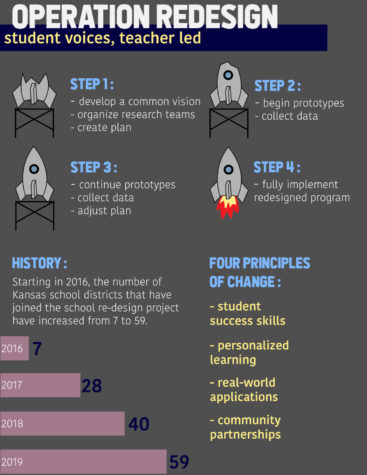