NEWS BRIEF: Board Meeting on March 28 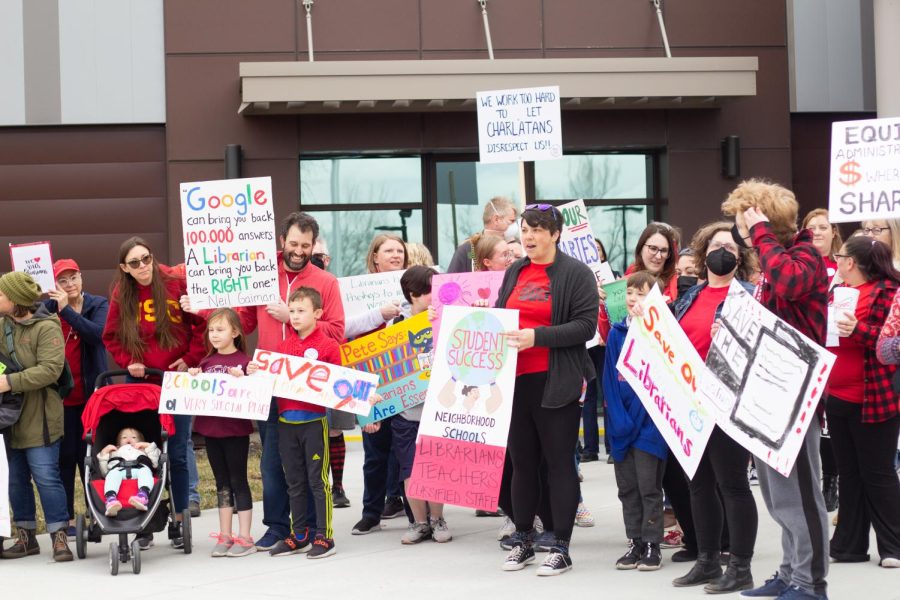 Yesterday, the USD 497 Board of Education decided to cut two library media specialists and implement $6.4 million worth of other budget cuts.

The new proposal will instead cut only two certified library positions: One from the middle and elementary level. This passed narrowly by a 4-3 vote.

“They are going after our librarians, which are a very essential part of our school,” junior Robin Heatwole said. “Half the administrators on the district don’t even know what they do.”

Before the meeting, librarians and union members came together to protest the suggested elimination of 12 of the 18 library media specialists currently employed by the district. This cut would have resulted in middle and elementary schools sharing six librarians, and the two high schools being left without one.

“The library is the heart of the school,” Sunset Hill library media specialist Fallon Farokhi said. “I don’t think anyone can deny that.”

In mid-December, the district released the possible cuts surrounding their program and others. On Wednesday, March 29, librarians were presented with a proposal suggesting to keep only 6 certified librarians.

“I was shocked and the majority of the librarians in the WebEx meeting were in tears,” said library media specialist Marissa Hegeman.

The proposal intended to replace certified librarians, who hold Masters of Library Science degrees, with library media assistants, who do not need specialized education. These assistants cannot teach classes, order books and do not have access to the proper student information to run a library.

“We’re trying to make the best out of the worst,” board member Kay Emerson said.

The remainder of the proposals will be discussed and voted on during future board meetings. These decisions will determine cuts and changes for the 2022-2023 school year.