Student Protesters Speak Out About Abortion 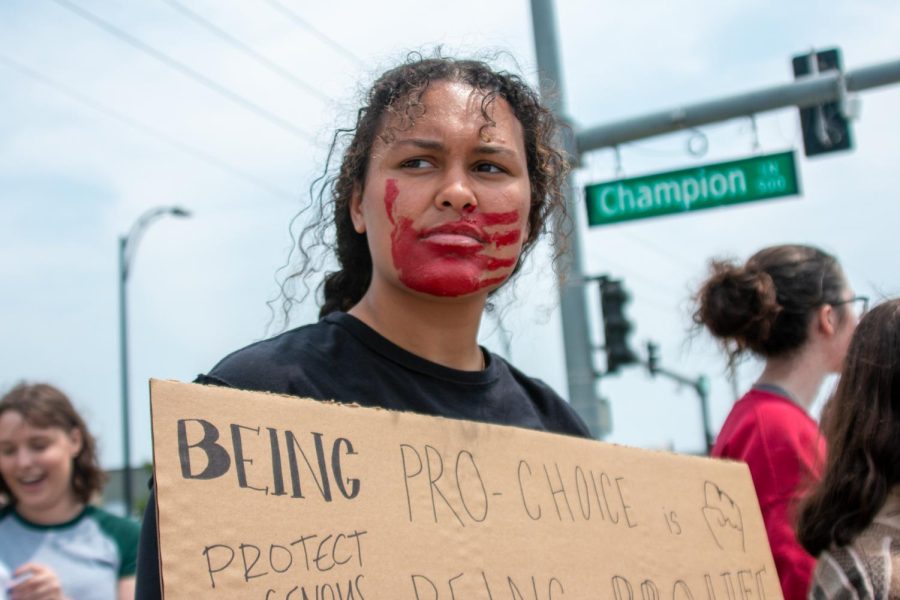 Earlier this month, a leaked Supreme Court draft showed the intent to overturn Roe v. Wade. If the ruling is overturned, individual states will be able to make decisions about abortion rights.

Currently, the Kansas Constitution protects abortion rights. However, on August 2, Kansans will have the opportunity to vote on the “Kansas No State Constitutional Right to Abortion and Legislative Power to Regulate Abortion Amendment”. If the amendment is passed, it will allow Kansas lawmakers to make all abortions illegal in Kansas, and would not be required to exempt cases of rape, incest, or necessity to save the life of the mother.

The pro-choice walkouts were created and organized by sophomore Adriana Cazares, who is an active advocate in human rights and politics. Cazares planned the event through the Instagram account @freddychesty.

“A person should be allowed to make a choice on their own bodies and not be ruled over by the government, it’s a personal decision,” Carazes said.

Carazes hoped to rally students to bring attention to the potential changes to abortion laws in the state and country.

The pro-choice protesters marched to the corner of 6th Street and Champion Lane holding signs saying, “Abortion is basic healthcare” and “Bans off our bodies”.

With them was sophomore Sophie Racy.

“Women should have the choice to choose; to keep or terminate their baby for whatever reason, whether [the] mother can’t have it, they’re not financially solvent enough to have it, the mother is in danger… I don’t think it’s anybody’s business but the mothers,” Racy said.

Many pro-choice supporters voiced that outlawing abortions would harm many pregnant women.

“We’re out here trying to save healthy and safe abortions,” senior Elijah Ditto said. “Banning them doesn’t stop them. It just makes them dangerous.”

The overturning of Roe v. Wade would not only damage women’s abortion right, but is predicted to have a large impact on women of color.

Edison’s points are proven by the “CDC’s Racial/Ethnic Disparities in Pregnancy-Related Deaths — United States, 2007–2016” report and the Department of Justice Archives.

At the same time, starting on the corner of Overland Drive and Champion Lane and then moving toward CVS on Sixth Street and Wakarusa Street, the pro-life protesters held a silent protest. It was organized and supported by senior Lilly Kidd.

“When I heard about the pro-choice protest I decided to ask for permission [from] Mr. Graber to also hold a protest but for pro-life,” Kidd said. “In the public school district, we should be able to protest [and] share both sides peacefully and respectfully.”

Students were joined by members of the Morning Star Church and Insight Women’s Center, which focuses on unplanned pregnancy options and care.

“Once the egg is fertilized, that is a life and that is not my body,” protester Kayci Rosenak said. “That is a separate body, with separate DNA, that has every right to live.”

Junior Jett Bartin also agreed, saying he is against abortions after the first month.

“I don’t see [abortions] as a good thing at all because those kids that are getting killed through abortions, can end up being heroes someday,” said Bartin.

With both protests taking place at the same time in close proximity, some pro-choice protesters felt it detracted from their message.

“I was irritated that [pro-life protesters] chose to use our walkout for their own platform,” said Cazares.

However, many pro-life protesters found sense in voicing their differing opinions near the pro-choice protest.

“It makes sense because usually whenever there’s one thing happening, there are people wanting to counteract that and do it at the same time,” Bartin said.

With both protests happening off-campus, no administrators were actively involved, but Principal Myron Graber hoped both parties would be able to put aside differing opinions and hear each other out.

“Everyone has certain beliefs but we just need to listen and stop the polarization that is dividing everyone right now and work together to solve problems and issues,” Graber said.

Both pro-choice and pro-life supporters hoped that their protest has had an impact on the community and that the goals they are fighting for will be met.

For pro-life protestor Brenda Mannscheck, she hopes Roe v. Wade will be overturned one day.

“My mother started working in this pro-life movement about 50 years ago,” Mannscheck said. “It’s been going on forever, and I’m thrilled at how far the organization has come.”

Ditto hopes that the pro-choice protest could help spread the word and convince eligible voters to vote pro-choice in the primary elections.

“I hope that more people realize that they can vote on August 2 and actually do something. I mean, protests are great….but it doesn’t actually do anything for legislation.” Ditto said.

If you will be 18 years or older on Aug. 2, voice your opinion on this issue at your local polling location.

Editors Note: Some pro-life protestors denied commentary. Two interviews had to be pulled, one from request, and another for requesting anonymity. Due to the conditions and information presented in the interview, the request for anonymity did not follow the AP conditions Free State Journalism follows to ensure credibility.