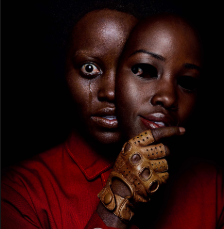 In 2017, Jordan Peele shocked the world with the film Get Out, which earned him an Oscar and instantaneous status as one of the most exciting new horror directors. In March of 2019, he followed that with another horror film called Us. I saw this film on opening night with little faith, as sophomore films from horror directors rarely come close to the quality of the original, and 2019 has been a year full of disappointing films up to this point, save for a few. Us is one of the few which fails to disappoint, as Peele gives us a film with great characters and even more great scares.

Starting with the best part of this film, it has to be the performance from Lupita Nyong’o of 12 Years a Slave. Nyong’o gives a layered dual performance as both Adelaide Wilson and Red. These two are both fantastic fully developed characters—a rarity in the horror genre. Nyong’o shows her full range of talents in the film, which may garner her an Oscar nomination this year.

The rest of the characters are also well done, as even those who in most films would be two dimensional are given their due in great character developing scenes. The fact that every character has a double gives these actors even more chances to have some fun with each role. No one shows this better than Tim Heidecker as Josh Taylor/Tex.

Despite neither of these characters being on screen for a long time, their presence is felt throughout. Heidecker adds another well layered dual performance as he is originally portrayed as an apathetic husband, while his double is a murderous psychopath. The semantics of this whole thing are quite confusing, but you can definitely see Heidecker is truly invested in both of these characters.

Another father figure in this story is Winston Duke as the “fun dad” Gabe, and the evil Abraham. Duke is another stupendous part of the film, serving  as the comic relief who always gives a good laugh. Overall, both characters and the actors behind them are fantastic.

Another great part of Us is Jordan Peele’s incredible screenplay. He won the Oscar for Get Out, and I think he has a real shot of doing it again this year. While Get Out is the better film, Us also has a wonderfully written script and delivers a superb twist. At the end of the movie, it is revealed that the character we all thought was Adelaide is actually Red.

The film ends with a reveal of young Adelaide switching places with her shadow, Red. This explain the main inconsistency that many people would have with the film—being that Red is the only one of the Shadows who has the ability to talk. Us also gives us an incredibly haunting closing image when Adelaide/Red realizes who she really is and looks over to her son, Jason, as he realizes it too.

The camera then zooms out to show that Red’s plan has worked as the Shadows are holding hands across burning America. This means thousands of people have been killed, as a tethered will only hold hands if their counterpart is dead. This haunting image laced with political subtext is one that will stick with you for days, and stay in the back of your mind for much longer.

You can’t have a horror film without some good scares, and the film really delivers  on that front. This is one aspect of Us that which is actually better than Get Out. Get Out, while it was certainly a horror film, was much more of a thriller. Us, on the other hand, is the very definition of a horror film.

You can feel the dread of the characters as they are being hunted by someone who knows their every move. The viewer builds an emotional bond with each characters, as it doesn’t rely solely on jumpscares like other horror films and instead builds a frightening atmosphere which oozes fear. Us also utilizes a haunting musical score to be even more terrifying.

Now, it’s not a perfect movie, as no movie is. There is one or two problems which I did have, and the biggest one would be the underground world the Tethered live in. In my opinion, the world which the Tethered have created in the sewers is incredibly weird. It leaves the mind to wonder if every single action we make results in someone in the sewers below us doing the exact same thing.

So many questions come out of this, the most important being who exactly made the Tethered? Of course, there’s the blatant subtext about the duality of man, but when you think about it for more than ten seconds, that aspect of the film somewhat falls apart.

However, there isn’t really a point to thinking about that when you can think about so many other amazing parts of this movie. Us succeeds on nearly every level, and while it may not be as good as Get Out, it’s a fantastic film that I’m sure will finish as one of my favorites of the year.