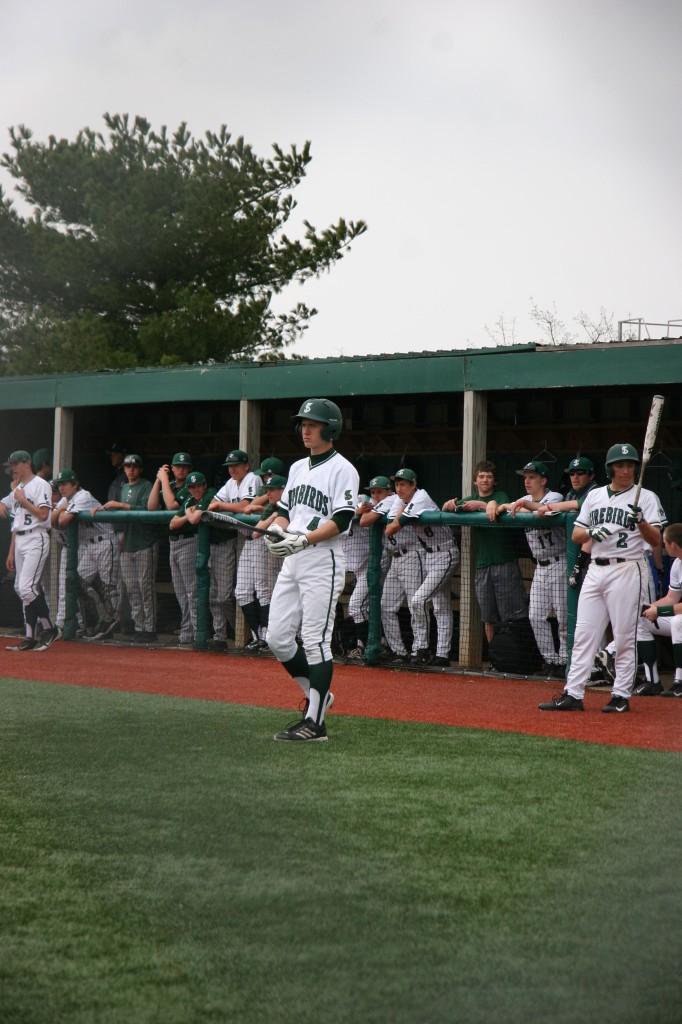 This season, the baseball team started off with an 11-game winning streak–a significant improvement from last year’s six-game losing streak.

Senior Sam Hearnen attributes much of the success to stronger playing during games.

“I think that we’re a lot more aggressive and we’re not playing timidly,” Hearnen said. “We’re playing really confident and we’re playing well as a group.”

Sophomores Joel Spain and Cooper Karlin agree. Spain also says that an increase in batting practice has been beneficial.

“I know we’ve been doing a lot of working on hitting,” Spain said. “Hitting was one of our main weaknesses last year, so the coaches have been focusing a lot on hitting and improving us on that.”

Karlin feels that, along with hitting improvements, their pitching has gotten better as well.

“[The performance] is way better,” Karlin said. “We have a lot [better] pitching this year than we did last year, and I think more athletes. A lot better, a lot more consistent.”

Coach Mike Hill feels that the athletes have put in a tremendous amount of effort preparing for this season.

“[There has been] a lot of practices since the last Monday in February,” Hill said, “and frankly prior to that was our five-week program for students who were interested to condition and get ready.”

The team’s conditioning prior to the season helped the athletes get fit.

“. . . We had some out-of-shape players,” Karlin said, “so it got them looking a little better, and it got them a lot faster, and that’s helped early in the season, so far.”

Hearnen feels that the atmosphere at practice has changed this season as well.

“I think that there is just a lot more excitement around at practice,” Hearnen said. “I think that we are starting to believe that we can do things that last year we didn’t necessarily think we could do.”

Baseball’s practice schedule can be split into two groups, according to Hill. The first is preseason.

“Preseason is pretty gruelling, actually,” Hill said. “It’s not uncommon for us to go three, three and a half, sometimes four hours a day, and through weekends as well . . . Our guys don’t get a spring break, I think they got one day off on spring break, and that’s a pretty big sacrifice they have to make, but it’s one that’s necessary for us to do what we want to do.”

The second portion is the time during the actual season, which is less strenuous.

“Once the season begins,” Hill said, “it’s pretty eclectic because not only are there games that we play, but then there are games that the sub-varsity will play on the field, so that means you’re limited in terms of practice.”

Not only has the team improved its skills, but they have also strengthened their bond through team dinners.

“We have a team dinner every Monday night here at the school that the parents will bring food [to],” Karlin said, “and normally we try another at least once or twice a week. We’ll go to a restaurant, Henry T’s or Buffalo Wild Wings or something, try to all go there, and just relax and have a good time.”

Teammates also like to have fun by pulling jokes on each other.

“We’re all just kind of practical jokers,” Hearnen said. “We like to joke around, but we know where the line is and we don’t cross it with each other. It’s all in good fun, and we just have a good time with each other . . . We like to mess around with our bud Lee [McMahon], because he’s really pale, and we sometimes call him soulless and a ginger, even though he doesn’t have red hair.”

Hill sees the team’s strong bond as beneficial to the baseball program.

“I think [the bond is] terrific,” Hill said. “I really like the way the kids have gelled, and that’s a credit to our seniors and their leadership. They seem to get along, which I think is an important component, not only amongst themselves, but also with our staff. They’ve been a really fun group to work with.”

Several of the athletes were on varsity together last season and have more experience returning to the field.

“We have a lot of returning players,” Spain said, “so we’re working on basically upgrading their skills and getting more experience since we were really young last year.”

Some of the players have certain routines they follow before a game; Hearnen is one of them.

“I do a special handshake with some of my teammates,” said Hearnen. “I’m kind of superstitious, so I have to wear the same undershirt underneath my uniform as I always have worn.”

Karlin has a pre-game ritual as well.

“I normally drink a Powerade,” Karlin said, “eat a protein bar, listen to music, and then kind of get all my stuff lined up in the dugout. Get the baseball bag looking okay. [I] have certain spots I put stuff in.”

Before a game, Hill feels that the players need to be level-headed and prepared for the competition.

“Baseball is a game that you have to play on an even keel,” Hill said, “so there is not really any Knute Rockne speeches before the game to get kids fired up or anything like that. What we hope to do is prepare them for the games by what we do in practice, and I do think our kids are well prepared.”

During pre-game, the team will do batting practice to warm up before they watch the opponents to observe their playing style. Once they figure out how the other team works they will prepare to counteract opposing team’s skills.

Spain believes that the team’s defense could set a school record this season as well.

“I think our defense is really good,” Spain said. “Right now we’re mainly trying to go for a school record on fielding percentage.”

Despite all of these things going right, Hearnen and Spain say that they have one thing to improve on.

“Probably the one difficulty we [have] faced [is] finishing games,” Hearnen said. “We’ve been starting off really well, but there was one game where we didn’t finish very well and the other team almost came back and won.”

“We need to work on finishing off games,” Spain said, “but definitely we’ve been able to get on top so that’s a good thing.”

Karlin feels that they also had some difficulties with their batting early in the season, but overall he feels the team has done well.

Hill feels that the team has only had minor problems.

“We’ve faced some adversity in games,” Hill said, “and the kids have handled that terrifically. We’ve been down, tied late in ball games, in tough situations, and they’ve responded well to that . . . they’ve handled [it] exactly the way we’ve hoped they would.”

The team hopes to compete well in the postseason this year too.

“One of the goals,” Spain said, “that has always been a goal at Free State, is win and/or compete in the league and possibly win the league championship and also to make it to the state tournament at the end of the year.”

Karlin added that the ultimate goal is winning the state tournament.

Hill’s goals are centered around improving the athletes skills.

“Really it’s about the kids getting better everyday,” Hill said, “and improving our level of play from the beginning of the season to the end of the season. As a coach you look at that on an individual basis: so does each kid get better? And, collectively, does the team get better?”

Hill also added that winning in postseason isn’t as important as constant improvement.

“We’ve had some great teams here that have won championships,” Hill said, “and those certainly are fun, but we’ve had other teams that I’ve felt just as good about that maybe didn’t win a championship, but they were able to improve as the season went on and that’s what makes you feel good as a coach.”

Karlin believes that the rest of the year looks promising.

“We’ve performed a lot better earlier in the season this year than we did all last year,” Karlin said. “That’s good, the future’s bright.”