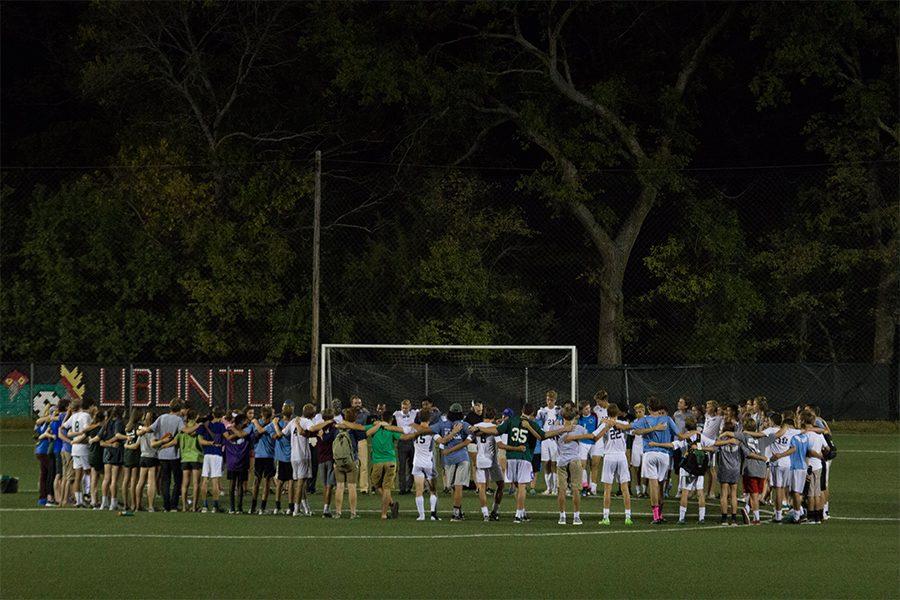 The varsity soccer team performs their ceremonial huddle after a home game. Fans and parents were encouraged to join.

A team, be it sports or clubs, is considered a family to those involved, and with family comes tradition. Traditions unite, motivate and aid a team in their journey towards success.

“For the boys, we bring out this gnome that is painted green and silver and we put it on the high dive,” McDonald said. “It’s called Lawnie the Land Gnome and it gives the guys good luck, supposedly.”

Traditions like the one McDonald uses helps to preserve those created by previous teams.

The cheerleaders, dance team and band often help lead the student section through chants and various dances. Cheerleader Sidney Cavner states that the cheerleaders have traditions of their own that celebrate their successes.

“After every practice, we break. We put our hands in and have one person call it…like someone [who] landed their back tuck that game,” Cavner said. “So they’ll call it and say ‘L.F.S. Free State! You know!’”

Some of the most notable traditions are those that get the crowd involved. At soccer games, the crowd joins the players and coaches after the game to circle up on the field.

“We’re all one,” varsity soccer player Toufik Ahmmed said. “It doesn’t matter who it is; we’re all a family. All the soccer players go in, all fans, parents.”

Students not playing a sport practice traditions as well. Senior Hype Club member Jarod Bennett is always in the student section. He says the student section practices many dances and chants at each game such as the “I Believe That We Will Win” chant and the “rollercoaster” around halftime.

High school traditions are conventionally thought of as pertaining to sports, but several clubs have traditions of their own.

“Before every show, we all circle up and do some warm-ups,” says Thespian Club vice president Anina Supernaw. The warm-ups are different from an athletic warm up, they help warm up an actor’s voice,

Diversity Club goes to the Festival of Cultures every year to celebrate different races and their traditions in a fun and safe environment.

The week prior to the Diversity Assembly, the club hosts Diversity Week.

“It doesn’t get a lot of participation from students, but I wish it was, because it’s very fun, especially for the Diversity Club people,” president Lanice Brown said. “We’re going to try and make it more fun.”

High school students regard traditions to be just as important as the team or club as a whole. They are timeless and are passed down from class to class.