TikToker brings autoimmune disease awareness to ‘For You’ page 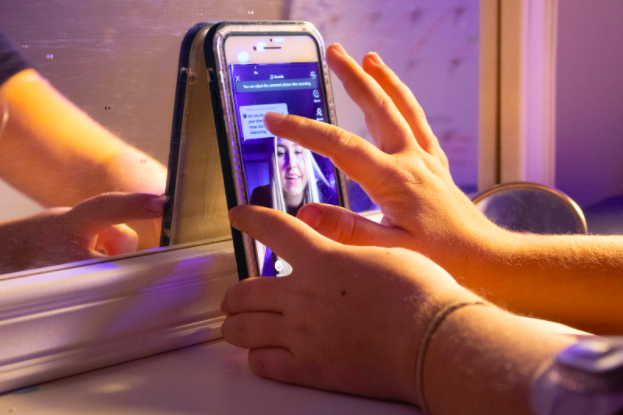 Meadows makes a video responding to a question in her comments about one of her autoimmune diseases. Meadows has Type 1 diabetes, celiac disease and juvenile arthritis and uses her platform to educate others and clear up misconceptions about her conditions. “Almost all my autoimmune diseases have stereotypes, and that’s one big thing that I want to break,” Meadows said.

Junior Addy Meadows doesn’t remember why she was in the hospital the first day of spring break, but she does remember filming a TikTok to Ke$ha’s “Cannibal” out of boredom from her hospital bed.

Meadows’ trips to the hospital are frequent due to her Type 1 diabetes, celiac disease and juvenile arthritis.

That TikTok amassed more than 29,400 views. It was the first of many viral videos about her conditions.

She received comments asking questions about her conditions and requesting for similar content.

She has continued documenting her experiences, and her account has gained popularity. @addymeadows now has 98,000 TikTok followers, and her most popular video has topped 1 million views.

Meadows hopes her content helps dispel stereotypes associated with her conditions. She said people often have a negative view of Type 1 diabetes, an autoimmune disease that caused her body to stop producing insulin.

“A lot of people think diabetes is caused by eating too much sugar and not exercising, but it’s the opposite,” Meadows said. “I was 20 pounds underweight when I was diagnosed. We don’t know why I got it.”

People often try to relate to her by saying gluten makes their stomach hurt, too, she said.

“And then I’ll have a video of me in the hospital, and they’re like, ‘Oh my gosh, what happened?’ and I am like, ‘Well, I accidentally had gluten,’” Meadows said.

Meadows said juvenile arthritis, an inflammation of the joints that causes a painful stiffness, is also misunderstood.

“With arthritis, people are just like, ‘Kids can’t get arthritis.’ And I’m just breaking that stereotype as well,” Meadows said.

Although her conditions can be difficult to manage, Meadows said she has found an online community that supports her and makes the experience more positive.

Many TikTok users express their gratitude for her videos in the comment section.

“Thank you for teaching everyone. I love your videos so much,” one user wrote.

Meadows is also a Juvenile Diabetes Research Foundation Ambassador. The program has teens share their story of life with Type 1 diabetes in an effort to raise awareness and funds for a cure.

“What I can say from talking to ambassadors, is half the things that they have gotten out of the program is meeting other people,” Martin said.

Through TikTok, Meadows has also met other teens with the same conditions. In a group chat called “Broken Pancreas Buddies,” Meadows and other TikTokers with Type 1 diabetes offer advice and support.

Meadows appreciates these connections because her friends at school can’t relate to her as her friends online can.

“I don’t have any friends that have an autoimmune disease,” Meadows said. “I can explain it to them, and they can try to understand, but they’re not going through it.”

Martin agreed that Type 1 diabetes is hard to understand if you’re not the one experiencing it.

“It can be very isolating when people that you’re around don’t understand that, even if they want to help or want to support you,” Martin said.

Despite most people in her life not having much personal experience with her conditions, they are still supportive.

“My family is my biggest support system,” Meadows said. “We do the Type 1 diabetes fundraiser walks, and we always do it as a family.”

Meadows’ parents and close friends monitor her glucose levels through an app. Her friends will often text her when she is at work and her blood sugar is dropping to ask if they could bring her a drink to help.

Meadows wants her TikTok followers to feel similar support and hopes her account can be a part of that.