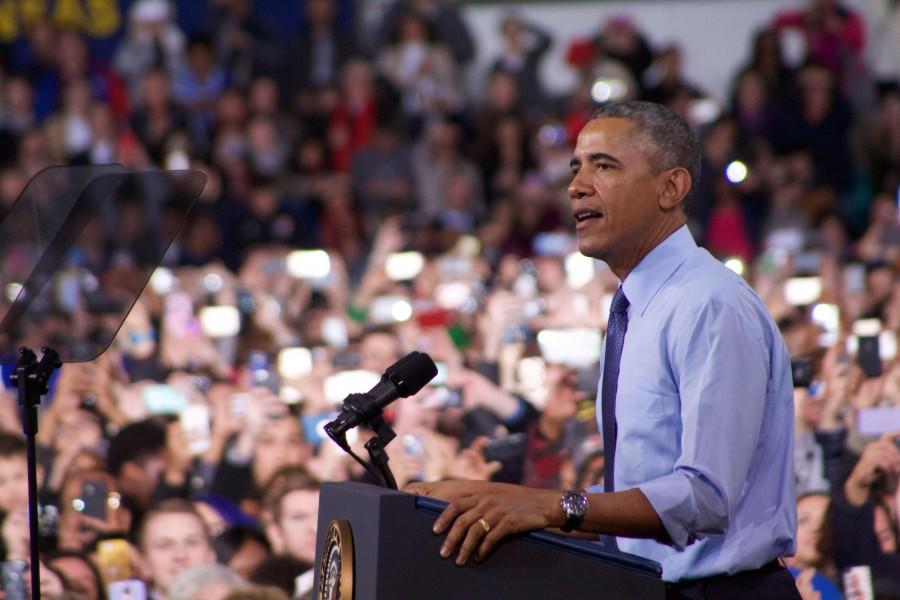 Looking out into a sea of smartphone cameras, President Barack Obama addresses a crowd of about 7,150 at Anschutz Sports Pavilion on KU Campus on Jan. 22. Obama’s speech reiterated and expanded on several topics mentioned in his recent State of the Union: child care, community college and middle class economics. “I’m a Kansas guy,” Obama said. 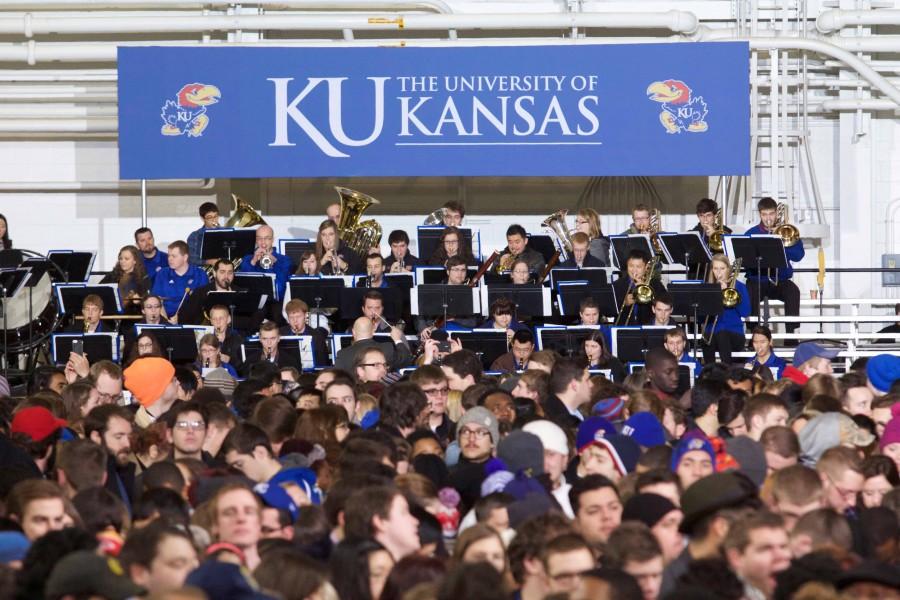 On Jan. 22, President Barack Obama spoke at KU in Anschutz Sports Pavilion, calling on Congress to address the need to provide childcare, free community college and equal pay for women. Many of his talking points from his State of the Union address on Tuesday were a part of today’s speech.

Among these topics was Obama’s proposal that child care should be cheaper to ensure that financially troubled families can afford to care properly for their children.

“It is time that we stop treating child care as a side issue or a quote, unquote women’s issue,” Obama said.

He also urged Congress to pass a bill to raise the minimum wage because families struggle to make it on $15,000 a year and demanded equal pay for all genders.

While people may disagree politically with Obama, he believes everyone wants what is best for the general welfare of the nation.

“There is no liberal America or conservative America–there is a United States of America,” Obama said. “We’re all on the same team … We as Americans have more in common than not.”

After a late night spent finishing her section of the Daily Kansan and sending out prep work emails to staff members, KU junior Miranda Davis woke up at 3 a.m. to prepare for her second time covering a Presidential event for the Daily Kansan, and her first time actually hearing President Barack Obama speak.

Davis, 2012 Free State graduate, was Editor in Chief of the Free Press during her senior year of high school and now serves as News Editor at the Daily Kansan. On Jan. 22, she joined numerous Free State alumni at Anschutz Sports Pavilion for Obama’s speech, which reiterated and expanded on several topics mentioned in his recent State of the Union: child care, community college and middle class economics.

While Davis worked with her staff to generate social media and online content during the speech, fellow alumnus, 2011 graduate KU senior Aaron Groene, stood in the crowd, processing the experience.

“He is a very talented speaker,” Groene said. “He is really good at public speaking, and it was very obvious today that is true. I mean, he—when he was talking about child care—Oh, man. It’s just really hard to explain because I’m just kind of soaking it in. Because it’s just one of those ‘Holy crap!’ moments. It was just all of it—there was never a dull moment.”

Unlike many of his fellow KU students, Groene received what many dubbed a “golden ticket” after waiting only 15 minutes outside the KU Student Activities Office for the second batch of tickets sent from the White House on Jan. 20. While it beat waiting hours in the cold, Groene questioned whether a ticket was necessary for admittance.

“[When I got there,] They were like, ‘Have your ticket out,’ but they didn’t check it at all,” Groene said. “I walked in, and they didn’t do anything. You could’ve walked in with a white piece of paper and held it up.”

KU sophomore Brian Morris, 2013 Free State graduate, braved the cold in the early morning for his ticket, and while his spot in the Pavilion wasn’t very close to the stage, he was able to capture footage of the event.

“I personally never thought I would get to see a sitting president; It’s pretty odd,” Morris said. “We were pretty far back in the crowd, but I got some pretty cool panorama shots and time lapses of people’s reactions when people heard the president speak.”

While documenting the event with his iPhone, Morris appreciated Obama’s stance on child care affordability and free community college.

“The most memorable part of the speech for me was probably when he was talking about the free community college because that impacts the whole university and will be a huge impact on the economy in the future,” Morris said.

As a member of the media, Davis’ top priority was to cover the event; however, the content was not lost in the coverage. Obama’s comments on equal pay for equal work resonated with her.

When he referred to women getting equal pay as men, that was a very strong comment. I mean, it’s 2015, duh.”

Today, Cole had a chance to support publicly the initiatives Obama proposed in his State of the Union address on Tuesday.

As a single mother of three, Cole told Obama she worried she would be unable to focus on her education while spending most of her paycheck on child care. Because of help from family, friends, professors and coworkers, Cole has been able to progress towards her degree. When Obama heard about Cole’s story, he requested she introduce him at KU.

“I was very nervous when I got the call asking me to introduce him, and I was shaking pretty much the entire time,” Cole said. “But it was definitely an honor because I’m not used to a lot of attention. I’m just a normal person, not anyone special.”

Cole believes Obama selected her because her letter addressed lowering the cost of childcare and education and strengthening the middle class, all of which Obama proposed in the State of the Union.

… It was definitely an honor because I’m not used to a lot of attention. I’m just a normal person, not anyone special.”

“I think the education and the child care and just helping middle class families is what we kind of have the same ideologies about,” Cole said.

If Obama is successful in lowering the costs of child care and education and raising minimum wages while giving women pay equity, Cole believes she and others like her will benefit.

When she completes her undergraduate degree, Cole plans on pursuing her PhD and expects to need assistance paying for child care and student loans.